Terpenes smell good, but did you know they can make you feel good too?

Now that the cannabis industry has become a mainstream market, you have probably already heard of cannabinoids like CBD and THC. However, there’s another set of compounds found in the cannabis plant that you should know about, too. They’re called "terpenes." And the effects of cannabis terpenes could be just as important as those of cannabinoids. What are terpenes? In this article, we’ll explore these interesting compounds as well as their potential benefits when paired with hemp-derived CBD (cannabidiol).

WATCH: What Are Terpenes?

In this one-minute video, Cornbread Hemp co-founder Jim Higdon explains what terpenes are, while standing in a field of organic hemp flowers that are rich in natural terpenes.

The Truth About Terpenes

When you catch a whiff of hemp, you’ll likely notice that it has a strong smell. Whether it’s sage, pine needles, or citrus fruits, that distinct scent is thanks to the organic plant compounds known as terpenes. They determine how things taste and smell.

Terpenes are aromatic compounds found all throughout the plant kingdom, not just found in hemp and marijuana.

There’s much more to terpenes than meets the nose—in the hemp and cannabis plant, terpene profiles may play a significant role in how certain cannabis strains make us feel.

Where Do Terpenes Come From?

As we mentioned before, terpenes are essential building blocks that are found in all types of life, and they have many different biological functions. In the cannabis plant, terpenes are produced in the cannabis flower—specifically in the little orange hairs, known as trichomes, that grow on each bud.

For cannabis and hemp strains in particular, it seems that terpenes serve several purposes at the same time. Some cannabis terpenes are used to keep insects and herbivores away, while some are used as a “sunscreen” to shield the plant from harmful UV rays.

Fun fact: Many terpenes found in cannabis plants are also found in other plant species. This is why some cannabis strains might smell like berries or lemon peel, while others smell like cloves or pine.

Why Do Terpenes Matter?

As pleasant as they are, hemp and cannabis terpenes don’t just provide aroma and flavor. They also might play an important role in how cannabinoids affect your mind and body. There are over 150 cannabinoids in hemp including CBD, CBG, CBN, CBC, and THC.

Current cannabis research supports the argument that, while the terpenes in cannabis and hemp might have therapeutic benefits on their own, their full potential is unlocked when they’re in the presence of cannabinoids (like CBD). This may be especially true when taken orally through sublingual or CBD capsule consumption, which means that your dosage level of CBD could be impacted as well!

According to a 2011 study published in the British Journal of Pharmacology, researchers found that cannabis terpenes work with cannabinoids like CBD and THC to produce a significant effect on the body. This phenomenon is known as the "entourage effect," and it might explain why terpenes are so important.

Though we still have a lot to uncover, this study supports the theory that CBD hemp products are more effective when they include the full spectrum of cannabinoids and terpenes that are naturally found in cannabis.

Don’t just take our word for it—we encourage you to do your own research, and try a full-spectrum CBD product yourself! We’re confident you’ll come to the same conclusion.

Cornbread Hemp's USDA organic Whole Flower CBD oil formula is as close as you can get to putting a hemp flower bud in a dropper. We use organic sugarcane ethanol in our cannabis extraction process to gently remove as many terpenes and cannabinoids as possible from organic hemp flowers. The ethanol evaporates leaving behind all the vital components needed to blend a potent full spectrum CBD oil that is also packed with terpenes.

Each terpene compound can have a different effect when working with cannabinoids. The terpene makeup of each hemp strain helps determine its effects. The most prominent terpenes that registered in our most recent Whole Flower extract lab analysis are alpha-Humulene, β-Caryophyllene, and alpha-Bisabolol.

Humulene is a terpene that imparts a spicy, earthy, woodsy aroma. It's one of the main terpenes responsible for the cannabis plant's distinct scent. This terpene is naturally found in hops as well, which is why some beers can smell like cannabis. Plants containing the terpene humulene have been used in folk medicine throughout history because of their potential healing properties.

Our lab tests also showed Caryophyllene in our hemp extract's terpene profile. β-Caryophyllene is a peppery, spicy terpene found in herbs and spices like rosemary, basil, cinnamon, and black pepper. Since it prefers to react with the cannabinoid receptor responsible for the body's comfort, the CB2 receptor, caryophyllene often appears in topicals and salves that are meant to relieve muscle and joint discomfort.

How Do Terpenes Affect the Body?

Among cannabis consumers and hemp enthusiasts, there’s a lot of talk about terpenes and their purported health benefits. Terpenes play an important role in aromatherapy, they are what make essential oils smell so good. Some people say that they actually feel better after smelling them.

Many people say that certain terpenes have wellness benefits. Although these people might not be wrong, we recommend that you take these statements with a grain of salt when shopping for natural products for wellness.

Terpenes are the subject of many ongoing studies. Until these studies conclude, we just don’t know much about them. In addition, the hemp and cannabis plants have hundreds of terpenes that all seem to work together. This makes the puzzle all the more complex.

Can Terpenes Get You High?

aNo—terpene content alone will not get you stoned. And CBD won’t get you high either. As far as we know, the only intoxicant in hemp and medical cannabis is THC, and that’s only when you consume enough.

Like we’ve already mentioned, it appears that a wide terpene profile has the largest impact in making your CBD product more effective—and even those effects still won’t be enough to get you high.

Are Terpenes Bad for You?

The common terpenes in hemp are generally recognized as safe. However, this only applies to food and oral products. We don’t know whether smoking or vaping these compounds is harmful or not.

Your best bet is a CBD oil that is meant for oral or sublingual consumption. According to current evidence, CBD oil is perfectly safe when you take the right precautions, and there are no reports of overdosing on CBD.

As always, though, we recommend that any cannabis consumer perform their own research before consuming anything that could put their health at risk. Because the CBD market is largely unregulated, some products may also contain harmful pesticides or fertilizers which could cause bad side effects. This is why we recommend a USDA-certified organic CBD product. 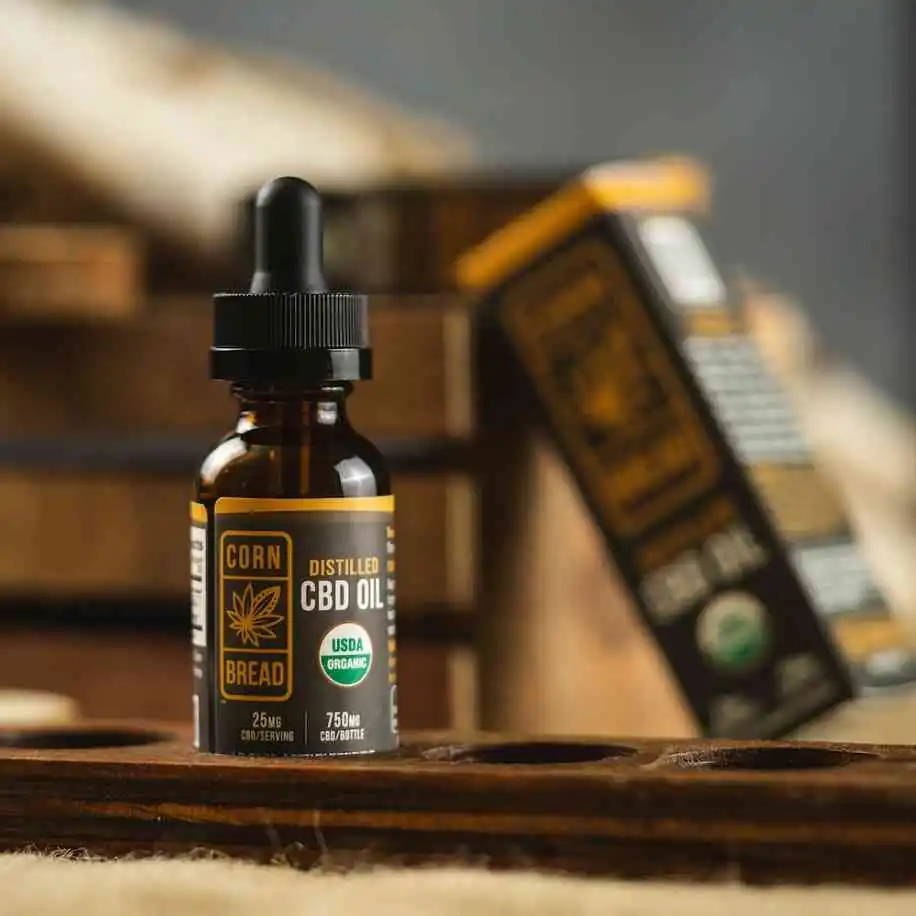 Cornbread Hemp is a family owned business that strives to offer the best quality legal hemp products possible. We source our organic hemp cannabis flowers from Kentucky farmers that we know personally. Yep, just the flowers. Our plant material for our cannabis extract is Flower-Only™ and never includes leaves and stems, which aren't as potent as the cannabis flowers and make the end product taste grassy instead of hempy.

Our gentle small-batch Flower-Only™ cannabis extraction method uses organic sugarcane ethanol to pull all of the terpenes and cannabinoids from the organic cannabis flowers. Then we combine the full spectrum extract with MCT coconut oil, the perfect carrier oil for optimum bioavailability. This allows our CBD oils to taste great naturally without the need for added flavors or sweeteners.

Cornbread Hemp has all products tested by a third party lab to ensure safety and potency and to provide a full terpene profile. We believe that the entourage effect is the best way to get the full benefits from the cannabis plant. And you can only achieve the entourage effect with all of the hundreds of cannabinoids and terpenes naturally found in cannabis. This is why we only produce full spectrum cannabis products that contain the federally legal amount of 0.3% THC.

A World of Possibilities

By learning more about terpenes, people can get closer to understanding hemp as a supplement. But the truth is, we’ve only scratched the surface of these compounds. These aroma molecules contained within hemp fall on a wide spectrum of aromas, effects, and uses. Each strain of hemp contains 10 to 30 different terpenes, and they all interact with each other in unique ways to provide different potential benefits.

As the cannabis industry grows and we get closer to understanding the complexity of hemp, plant geneticists will have more opportunities to develop new cannabis strains that produce desired effects. Though we have a lot to learn, we’re probably not too far off from fully unlocking the power of terpenes—and the rest of hemp’s natural compounds, too.

But until then, we can enjoy hemp just as nature intended: in its whole, natural state. Ready to give hemp a shot? Check out our Flower-Only™ full spectrum CBD oil here.

Where are terpenes produced in the cannabis plant?

In the cannabis plant, terpenes — organic chemical compounds responsible for taste and smell — are produced in the cannabis flower—specifically in the little orange hairs, known as trichomes, that grow on each bud.

Can you get high from terpenes?

No—terpene content alone will not get you high, neither will CBD. As far as we know, the only intoxicant in hemp and medical cannabis is THC, and that’s only when you consume enough.

What role do terpenes play in aromatherapy?

Terpenes play an important role in aromatherapy. They are what make essential oils smell so good. Some people say that they actually feel better after smelling them.