Cannabidiol or CBD is derived from the cannabis sativa plant. Cannabis sativa manifests in different ways, but the two ways that matter most when it comes to CBD and CBD gummies are as a marijuana plant and as a hemp plant. The marijuana plant is bred to be high in tetrahydrocannabinol, otherwise known as THC, and low in CBD.

The hemp plant is bred to be high in CBD and low in THC. THC is the main psychoactive compound in cannabis that produces a high sensation when marijuana products are consumed. THC also has therapeutic value; we've seen that with the success of the medical cannabis field. More than 90 percent of the country believesmedical marijuana should be legal.

While marijuana remains federally illegal and illegal still in many states, hemp was made federally legal by the 2018 Farm Bill which stated that hemp-derived CBD products were legal, as long as they had under 0.3 percent of THC by weight.

What are CBD gummies?

People love gummy things; the popularity of gummy bears, which originated in Germany in the mid-1800s, has given rise to gummy worms, gummy sharks, gummy vitamins, and gummy supplements. There are even some prescription medications that can come in gummy form. CBD gummies are gummies made with CBD extract.

The fruit juice is heated up and mixed with Cornbread Hemp's flower-only™ hemp extract, which contains the highest legal level of THC. Then, Cornbread Hemp uses apple pectin, along with organic tapioca syrup, organic carnauba wax, and organic ginger to thicken the gummies. We also add organic beetroot for color.

Then we put all of the ingredients in a tray and pop it in the freezer. That's where the thickeners do their job and turn the liquid into a solid, squishy plane. Next, we cut them up into bite-sized pieces and roll them in organic cane sugar both to help keep them separate and to add a bit more sweetness. These are then packed in an amber glass jar and readied for shipping.

Cornbread Hemp products ship all across the United States and its territories safely and legally.

What do CBD gummies do?

Full-spectrum CBD gummies are great for both immediate and long-term relief. It is best to take the same dosage every day at the same time or times. CBD gummies and all CBD products are best consumed with a meal, particularly one that is high in fat content. The fat in the meal helps the CBD absorb more quickly and thoroughly.

When you take CBD gummies, you reap the benefits of two ways of absorbing CBD. The first way is as you are chewing the gummies, some bits of CBD are being absorbed into the bloodstream by the tiny blood vessels in your mouth, especially the sublingual ones. Then once you swallow the gummy and it goes through your digestive tract, the remainder of the CBD is absorbed into the bloodstream by the digestive process.

Among the many benefits of CBD gummies include a reduction in inflammation, relief of stress, and a normalization of sleep cycles. 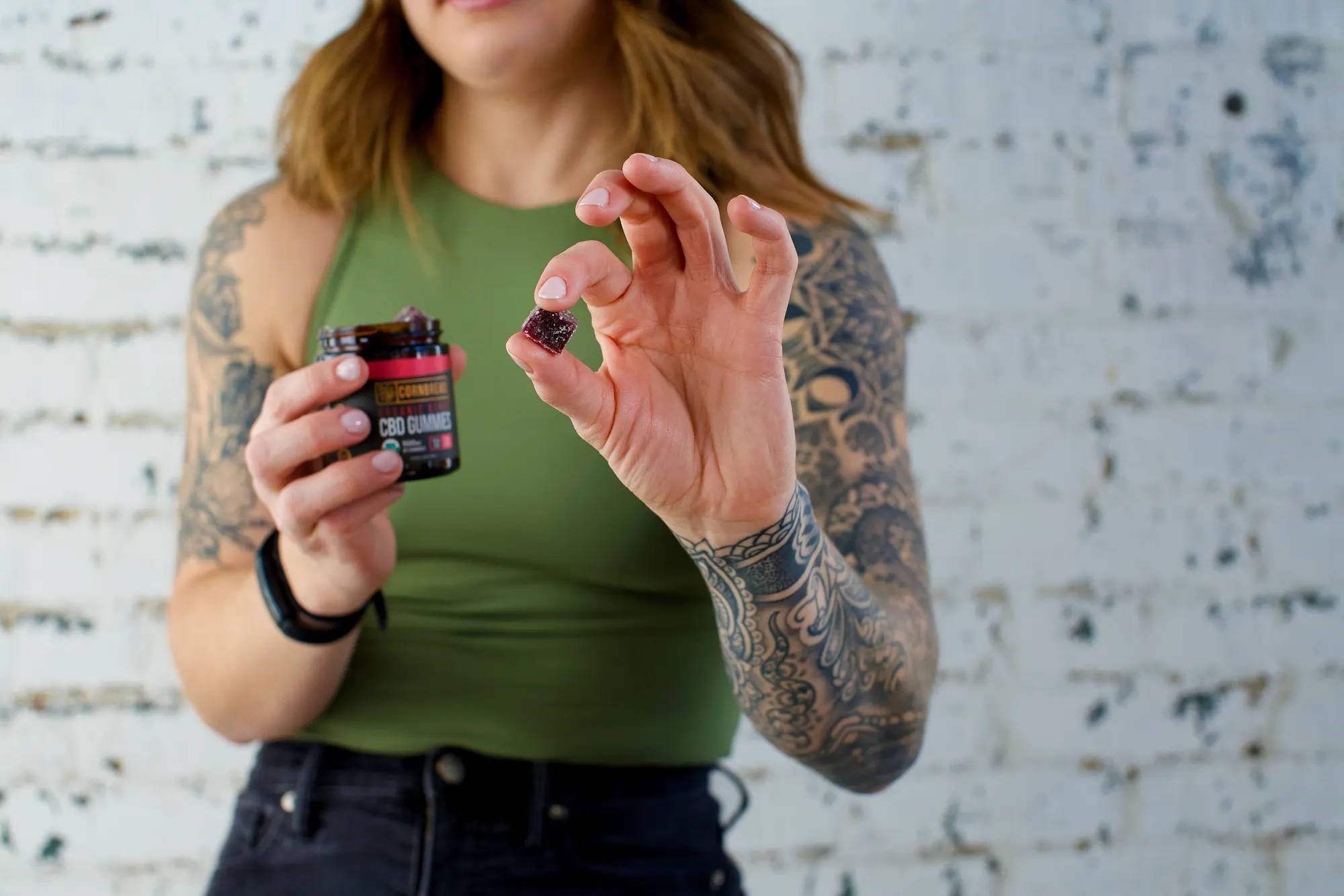 Did you overdo it at the gym or do you find yourself struggling with the aches and pains that accompany aging? One in five Americans experiences chronic pain, according to the National Center for Health Statistics of the Centers for Disease Control and Prevention's National Health Interview Survey (NHIS), a large household-based annual survey that offers valuable insights into the health statuses of U.S. adults nationwide.1

For example, endocannabinoids or cannabinoids might target CB1 receptors in a spinal nerve to relieve pain. Others might bind to a CB2 receptor in your immune cells to signal that your body’s experiencing inflammation, a common sign of autoimmune disorders.2

All of these cannabinoids, including THC, CBD, and all of the others, work better together than they do alone. Specifically, they all help to support the CBD. This is called the "entourage effect." While CBD alone is good-- which is why some companies sell pure CBD isolate-- CBD works best when it comes with its "entourage" of fellow cannabinoids. This is called full-spectrum CBD, as opposed to broad-spectrum CBD gummies, which have no THC in them whatsoever, and CBD isolate, which is pure CBD with none of the other cannabinoids.

One of the systems that a CBD gummy can help with is the one that governs inflammation in the body. Some pains and aches are caused by inflammation, especially inflammation caused by stress on the body or repetitive movements like you would experience while working out or playing sports. A CBD gummy before or after working out can help bring your body back into balance. Pain relief is a major reason people take CBD oils.

We mentioned that CBD-infused gummies can have both short-term and long-term effects; one good example of this is CBD as used to combat stress. Should you have an important meeting with a client, a public speaking gig, or something else that could up your feelings of anxiousness, taking CBD before the event could help you combat some of that stress of the moment. If you are someone who is generally sensitive to stressors in your life, the benefits of CBD taken regularly at the same dosage and time include general relaxation and a sense of balance.

Manifestations of stress include:

The National Institute on Drug Abuse (NIDA) says that CBD has been shown to reduce stress in animals such as rats. According to this research, rats on CBD showed a reduction in symptoms of stress like a reduction in their heart rate. More research needs to be done, specifically on humans.

In general, according to CBD research, CBD appears to be good for your mental health.

CBD works to help maintain sleep health conditions in a number of ways.

We've already learned that full-spectrum CBD gummies can help you manage stressors in a more productive way. People who are stressed frequently are kept awake by their emotions and their racing brain. So just by alleviating some of your reactions to stressful things in life you may already be on your way to a better night's sleep.

Likewise, pain and discomfort can also keep you up at night. A full-spectrum CBD product could help to reduce inflammation that is causing pain. Being able to sleep in comfort is something that organic CBD gummies can help you with.

According to Healthline, CBD is generally considered safe. However, some people who ingest CBD may experience some side effects, including:

CBD may also interact with other medications or dietary supplements you’re taking. Exercise particular caution if you take medications, such as blood thinners, that come with a “grapefruit warning.” CBD and grapefruit both interact with enzymes that are important to drug metabolism. Never reduce or go off of prescription medication in favor of CBD without consulting your doctor; cutting back on certain medications can lead to withdrawal, which in some cases may be severe.4

CBD sales have been up every year. You can buy CBD gummies in local healthcare stores, CBD boutiques, and natural food groceries. But it's really online where you can discover the vast CBD market and the best CBD gummies for you. If you've decided on taking CBD gummies, the many resources on the internet can steer you in the right direction toward the right CBD gummies. Pay special attention to reviews, both on a brand's website and in trusted media.

Cornbread Hemp's CBD gummies come in two strengths: 10mg per gummy or 50mg per gummy. The 50mg gummies have 2mg of THC in each CBD gummy along with the many other cannabinoids. They are vegan, organic, full-spectrum, and made from the flower only™ of the cannabis plant. These CBD edibles are delicious and easy to take. They are safe and legal and ready to be delivered right to your door via the United States Post Office and other delivery services.