A majority of Americans want cannabis to be legal, and most don’t understand why it became illegal in the first place. So how did cannabis become a crime?

It all started in the 1930’s, just a few years after America ended Prohibition on alcohol in 1933. In this post-repeal world, law enforcement officials were eager to find something new to criminalize, and cannabis became their target. At the same time, there were growing corporate interests that wanted to end the American cannabis industry.

These two interests – law enforcement and powerful corporations – lobbied Congress to pass a bill to make cannabis illegal called the “Marihuana Tax Act” in 1937. The bill’s sponsors chose not to refer to cannabis as “cannabis,” but instead chose the term used by Mexican immigrants, “marijuana.” However, the bill’s sponsors were so ignorant that they spelled marijuana like it sounds, with an “h” – “marihuana,” instead of how it’s written. 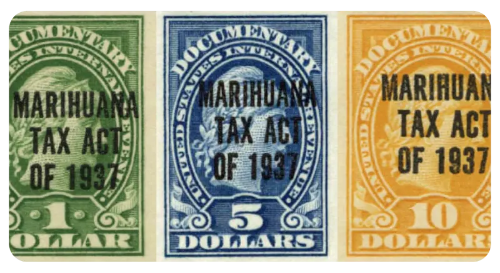 These Congressional legislators were so eager to criminalize cannabis that they failed to consider that the U.S. military remained a huge consumer of rope made from hemp. In the 1930’s, this wasn’t a problem because the U.S. Navy was buying jute rope from the Philippines.

But in early 1942, Japan attacked the Philippines and took away America’s rope supply just after destroying the U.S. Pacific Fleet at Pearl Harbor. This caused the U.S. military to launch an effort with American farmers called “Hemp for Victory” to revitalize the crop that it had just criminalized only five years earlier.

“Hemp for Victory” lasted about three years, and was discontinued after the end of World War II in 1946. For the next twenty years, very few Americans outside of certain cities had any understanding of the benefits of cannabis. All that changed with the Vietnam War.

Before the Vietnam War, cannabis was used recreationally and illegally in cities like New York, Los Angeles, and New Orleans – but hardly anywhere else. But in the late 1960’s, the Vietnam War brought cannabis use to every corner of America. Young men drafted into military service learned about cannabis use while fighting in Vietnam, and when they returned home, they discovered their friends had discovered it in their absence.

By the time that Richard Nixon was elected president in 1968, cannabis use had become widespread among Nixon’s most powerful political enemies – Black people and members of the anti-war effort. Just a few years after the passage of the Voting Rights Act granted new political power to Black people, Nixon wanted to reduce the power of the Black vote and saw cannabis as a means to accomplish that goal.

In his first term, Nixon declared a “war on drugs,” created the DEA, and passed the Controlled Substances Act, which classified cannabis as “Schedule I” along with heroin. By declaring war on cannabis, Nixon gave police departments the power to use force against peaceful citizens who happened to be in possession of cannabis. 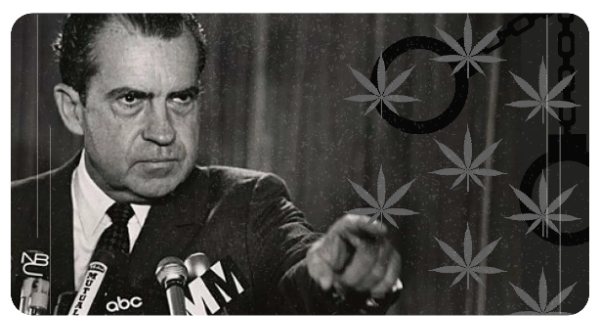 President Jimmy Carter had a much softer approach to cannabis. Willie Nelson smoked a joint on the roof of the White House during this period, and many people believed that President Carter would legalize it in his second term. However, there would be no second term for Jimmy Carter when he lost to Ronald Reagan in 1980.

President Reagan went right back to the Nixon playbook and used cannabis as a way to divide Americans against each other. After the cocaine overdose death of basketball star Len Bias in 1986, Congress agreed to pass Reagan’s draconian anti-drug bills, including laws still on the books that mandate THC drug testing for employees.

The 1990’s – Beginnings of Legalization

In 1996, California became the first state to legalize medical marijuana, as a response to the AIDS crisis. Soon, other states began to follow this model – first in the western United States, then in New England, and then everywhere. As Americans became comfortable with medical marijuana, the concept of legal recreational marijuana became more realistic.

Over the next two decades, medical marijuana spread to every corner of the nation. Meanwhile, the federal prohibition against marijuana remained unchanged.

In 2012, two states made the leap to become the first states to legalize recreational marijuana – Colorado and Washington. Then in 2014, Congress passed a Farm Bill that created pilot programs for hemp cultivation with THC below 0.3 percent. That opened the door to the legal CBD industry.

Before leaving office, President Obama granted clemency to 1,715 people, the most of any president in U.S. history. That includes freeing 568 people who had been serving life sentences.1 But he didn’t legalize marijuana.

The only thing that President Trump did to move this issue forward was to sign the 2018 Farm Bill into law, which permanently legalized hemp with THC below 0.3 percent.

In one of his first acts as president, Biden fired five White House staffers for failing drug tests put in place in the 1980’s by President Reagan.2 And under Biden’s Department of Justice, federal marijuana arrests have increased by 25 percent.3

Meanwhile, states continue to legalize. As of the summer of 2022, 37 states have legalized medical marijuana, and 19 states plus the District of Columbia have legalized adult use cannabis.

The House of Representatives has passed the MORE Act twice, which would legalize cannabis at the federal level, but it has yet to receive a vote in the Senate, where it does not have the 60 votes necessary to pass.

That’s why cannabis remains illegal in America today; it needs 60 votes in the Senate. And despite the fact that 68 percent of Americans want cannabis to be legal, there aren’t 60 senators who agree.4