What to Know About Mixing Them

As CBD oils and other products continue to skyrocket in popularity, not just for symptom-specific but also recreational use, questions remain about how CDB interacts with other substances people consume in their leisure time.

CBD comes in many forms. CBD oils are currently the most popular. You can also find it in the form of a CBD capsule, or as CBD gummies, CBD topicals, and even CBD products for pets. CBD is regarded to be safe. But, can you safely mix CBD products with alcohol? What happens when the two substances are in your bloodstream at the same time?

As for CBD and alcoholic beverages, CBD infused cocktails have been popping up on craft bar menus since the Farm Bill of 2018 legalized hemp with minute levels of THC. Even wine and liquor manufacturers have been producing CBD infused products. This raises questions about the effects of mixing them: CBD and alcohol, is it safe?

CBD stands for cannabidiol. It is one of the main active ingredients of the cannabis plant.1 However, most CBD available in the United States is derived from hemp, which is defined by federal law as a cannabis plant with a THC level not more than 0.3%.

Traditionally, hemp has been used for commercial and industrial products. Industrial hemp has been used for rope and textiles, clothing, food, paper, bioplastics, insulation and even biofuel. High-THC cannabis, sometimes referred to as "marijuana," is only legal under specific state laws. CBD rich hemp is federally legal as of 2018. Hemp plants look identical to marijuana plants because they are essentially the same plant, Cannabis sativa. The only difference between hemp and marijuana is the level of THC.

CBD is different than THC found in marijuana, CBD does not get you “high.” But it still retains many of the potential wellness benefits associated with medical cannabis, which is growing in popularity as a treatment for many ailments in at least 33 U.S. states. According to the World Health Organization (WHO), a study that compared oral CBD ingestion to active marijuana smoking found that the latter produced abuse-related effects while the former did not.2

According to the WHO study, there is evidence that CBD could have many potential wellness benefits.3 At present, there are no cases of reported abuse or dependence relating to the use of CBD oil.4

Alcohol is in wine, beer, spirits, or other intoxicating beverages. It is produced by yeast that consumes and processes the sugar (fermentation) in certain carbohydrate-rich foods such as grains, grapes, berries, and starchy vegetables. It is the main psychoactive ingredient in beverages and one of the most popular intoxicants around the world.

In moderation, alcohol can be consumed as part of everyday recreational activities. In certain cultures, alcohol can also play an important role in social interactions, religious ceremonies, or rituals. Alcohol often reduces inhibitions and impairs judgement and can alter a person’s typical behaviors. However, it has addictive properties that can lead to abuse, health problems, relationship issues and even death.

How does alcohol affect a person while they are drinking, and the day after? Here's a short list of potential acute side effects associated with alcohol, which can vary depending on the amount ingested:

Long-term use of alcohol can result in some nasty chronic conditions and negative health effects, especially in a person who develops an alcohol addiction. Chronic side effects associated with alcohol intake in excessive amounts over time can include: 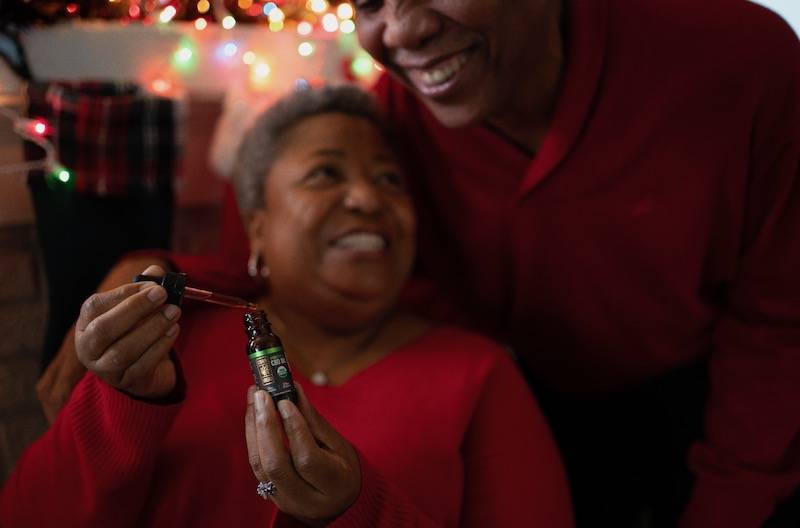 CBD and Alcohol: Do They Mix?

Sure they do! Alcoholic beverage producers and bartenders already make CBD cocktails, and its easy to find a CBD cocktail recipe out there. But there may be drawbacks to blending alcohol and CBD. According to a report by Healthline, several small animal studies show that mixing CBD and alcohol may amplify each other’s effects. Taking the two together in high doses may cause drowsiness and sedation.5

However, some human and animal studies show that taking CBD may protect against alcohol-induced cell and organ damage. It may also potentially reduce blood alcohol levels and relieve alcohol addiction and withdrawal symptoms. Unfortunately, most existing research is focused on a few animal studies where subjects received high amounts of both alcohol and CBD.

Not enough research examines the effects of how moderate amounts of CBD mixed with alcohol interact with human subjects. Until more and broader research is available, it remains unclear if alcohol and CBD could be combined safely.6

What Happens When You Take CBD with Alcohol?

When mixing CBD and alcohol together, they may amplify each other’s effects, especially when it comes to the sedative properties of both substances. Both, when taken independently, can reduce social fears.

Relaxation is often the goal of moderate use of both alcohol and CBD, but the effects of moderate consumption of both substances separately vary widely by individual. While some people who have consumed a moderate-to-high amount of alcohol may feel lethargic or drowsy, others may experience feelings of agitation or heightened irritability. Some may experience an ease of social interaction that they don’t feel when not effected by alcohol; others may experience more negative emotions and even off-putting behavior.

You don't have to consume CBD infused alcohol to create an interaction, they can be taken separately. The two substances can interact if you take them within four to eight hours of each other, according James Giordano, professor of neurology and biochemistry at Georgetown University Medical Center. A drink with dinner followed by CBD before bed means the CBD may have a stronger effect than it would without the alcohol.7

According to Healthline, studies found that CBD infused alcohol caused impairments in motor skills and alterations in the perception of time. Participants did not experience these effects when they took CBD by itself.8

Whether you overindulge on alcohol for one celebratory night or binge drinking on a regular basis (both of which are inadvisable), using CBD may help relieve some hangover side effects. Ingested prior to alcohol consumption, CBD may make drinkers less likely to experience alcohol-induced oxidative damage in the liver than those that didn’t have CBD.9 Also, when you take CBD it can potentially reduce hangover side effects such as headache, nausea, and increased blood pressure. CBD spurs damaged cells to degenerate, which can counteract alcohol’s effects.

These studies are not conclusive, but it seems as though if you want to indulge in alcoholic beverages on a recreational basis, it might be better for your body if you skip the alcohol and just take CBD by itself to relax.10

Some studies, conducted in the 1970’s, suggested that the ingestion of CBD may lower blood alcohol levels in human subjects. However, this does not reduce levels of impairment caused by alcohol, so it is inadvisable to consider risky actions like driving or operating machinery while on a combination of alcohol and CBD.

You may “beat the system” if pulled over by the police by presenting with a lower blood alcohol concentration, but you are not “sobering up.” Your behavior with the CBD-lowered BAC is no different than if you’d not taken CBD at all. 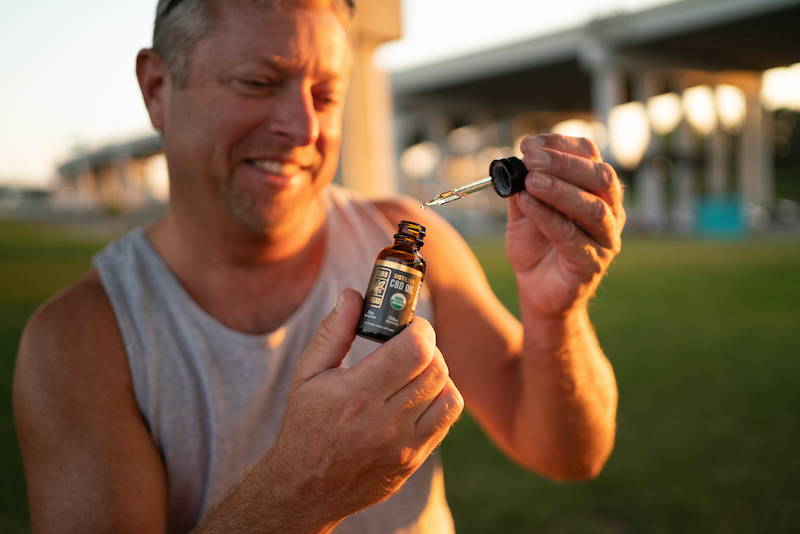 Can CBD Ease Symptoms of Addiction and Withdrawal?

CBD has the potential to treat alcohol use disorder. One study in the Journal of Psychopharmacology found that people who drank alcohol and took a CBD capsule had lower blood alcohol levels than those who had alcohol alone, though they experienced the same impairments in cognition and motor coordination, according to Vice.11

Another study in Pharmacology Biochemistry and Behavior found that rodents experienced less alcohol-induced neuro-degeneration if they received CBD through a topical CBD gel while the alcohol was administered.12

Research has shown that rodents that ingested CBD thirty minutes before ingesting alcohol were less likely to experience alcohol-induced oxidative damage in the liver than those that didn’t have the CBD.13 That means less fat could accumulate in the liver. Fat in the liver can cause fatty liver, liver toxicity, and hepatitis.

Some researchers have found that CBD can ease the symptoms of an alcohol-related hangover by degenerating those cells damaged by the over-consumption of alcoholic beverages. That means CBD could be a viable tool for managing the symptoms of a hangover, including headaches, increased blood pressure, irritability, restlessness, and nausea.

Should You Mix CBD and Alcohol?

Research on the commingling of the two psychoactive substances has been small and inconclusive. While the effects of mixing CBD and alcohol together may deliver heightened results of the positive ramifications of ingesting either of the two, it can also produce negative results like heightened feelings of drowsiness, irritability, and listlessness.

We very much hope for the day that will come that will answer these questions in a large clinical trial. Until then, we can only consider the small-sized trials, anecdotal responses, and personal experiences. There is still research needed on whether taking CBD and alcohol together can cause adverse health effects.14

According to another study referenced by VICE magazine: If you’re going to be taking CBD and alcohol together, keep the doses low and trying both on their own first, so you know how you react to them individually before combining them.15 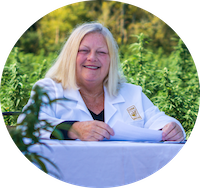 What happens when you mix CBD and alcohol?

Mixing CBD with alcohol can heighten the effects of both. Consuming both, either at the same time or within a few hours of each other, may make you drowsy or lethargic.

Is it safe to mix alcohol with CBD?

Some animal studies show that taking CBD may protect against alcohol-induced cell and organ damage. It may also potentially reduce blood alcohol levels and relieve alcohol addiction and withdrawal symptoms.

How do you use CBD in cocktails?

Some people infuse sugar water with CBD oil and use that in any cocktail that requires simple syrup. You can put a few dashes in a Bloody Mary. Use a fruit-flavored CBD gummy instead of a cherry in your Manhattan. Put a CBD gummy on the rim of a margarita glass.

All Rights Reserved. The statements made regarding these products have not been evaluated by the Food and Drug Administration. The efficacy of these products has not been confirmed by FDA-approved research. These products are not intended to diagnose, treat, cure or prevent any disease. All information presented here is not meant as a substitute for or alternative to information from health care practitioners. Please consult your health care professional about potential interactions or other possible complications before using any CBD product.